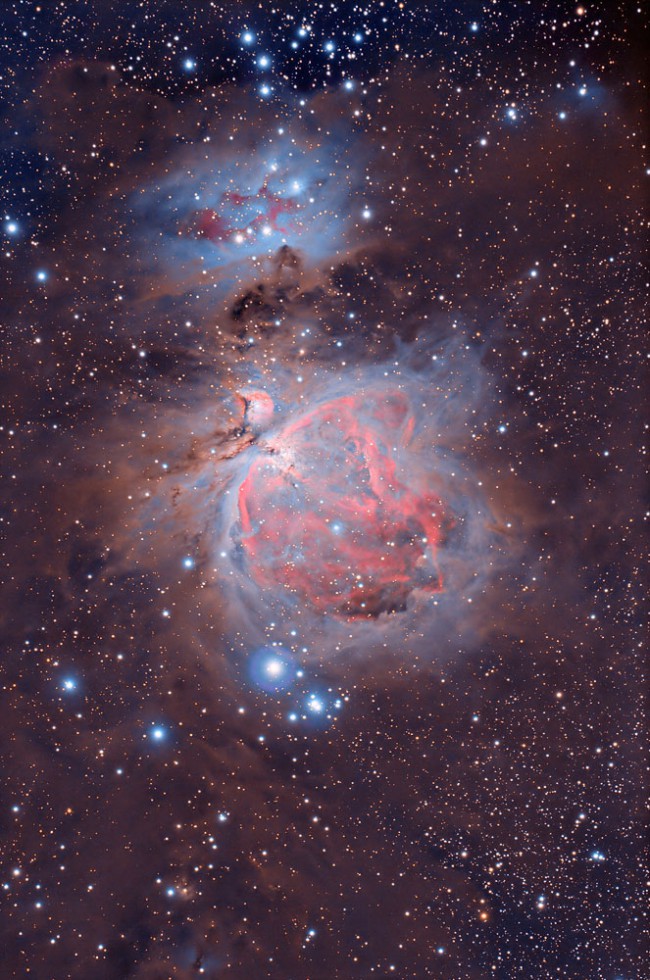 The Orion Nebula is the most famous nebula in the sky. It is the Great Princess of Winter Nights. It is easily visible unaided eyes just below, or above if you’re in southern hemisphere, the Orion’s Belt and can be recognized with a simple binocular. In fact the Orion constellation in its entirety is a large nebula which M42 is just the most luminous part. It is also a star nursery : observation with the Hubble Space Telescope reveal protoplanetary disks inside. It is located at a distance of 1,350 light-years and is estimated to be 24 light years across.

Unlike a novice might think, this is not an easy photographic target. Especially when you want to show everything. That is to say, the trapeze at the very very bright center and all the dust and vaguely ionized gas that surrounds it.

First difficulty: it happens in winters. And recent winters have been mostly rainy. Thank you global warming. Before, we had beautiful sunny days and negative temperature guaranteeing us clear nights. It’s been 4 years that I expected to be able to point the FSQ to it. And it does not happen as expected.

To acquire all the extreme dynamics of this part of the sky you have to mix different exposure times. I had done some testing in October and I was surprised to see the trapeze completely burned on 30s exposures. We must come down to 10s and again, it’s limit. For the weaker parts, I made 5min exposures, 10min would not be luxury.

Last difficulty: it is low on the horizon that does not leave much time along the night to acquire all the necessary exposures before it is in the turbulence and light pollution. Especially as the sky was diffusing light that night with 20.7 SQM. I’ve seen better.

I had the idea to make two night from 21 to 23 December last year, but the telescope has been covered by dew the first night and I foolishly forget to turn the heaters on. The second night was much more dry, curiously.

I finally acquired 34 exposures of 5 minutes and 14 exposures 10 seconds. I wished I have more. It should have been doing 5s, 30s and perhaps poses 10 minutes exposures and then a second night would not have been too much.

For the processing, I can appreciate the power of PixInsight even it is not easy to tame. Several day of “work”, I had to made it twice.

This site uses Akismet to reduce spam. Learn how your comment data is processed.